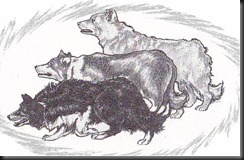 and even though they are half-brothers — They couldn’t be more different if they tried. Both are talented and totally enjoyable to work but so very different – in personality and working style. I have to remind myself to change my method and attitude with each of them. If I tried to work them both the same – neither would progress as they should.

One is a big, long legged, easy going male. He tends to be independent with a mind of his own. When we go to the sheep he’s always trying to get to them before I send him. When called off he runs a distance and turns trying to get back to the sheep. But, at the same time he can be soft with a touch of “quit” about him if corrections get tough. A bit of a dichotomy to “blend” those two “issues” together when it comes to training.

He is all forward with very little flank about him. He will take 50 sheep and just drive them straight without flanking. He has so much forward he can split his sheep if not slowed down. However, he has enough feel that he will “rock back” if the sheep do split as he does have a desire to keep sheep together. He doesn’t have a lot of eye or pace … so I will have to work on “holding him back” trying to “install” pace. I won’t have a worry about him not pushing through “the bubble”.

I do love his forward but need to start putting some “sideways” in him. So flanks will be the number one thing I will work on with him. Driving and pushing will come naturally to him.

However, I will intermingle the things he’s good at (forward) with the things he’s not (flanks) to keep his attitude right … while putting “clean flanks” making sure I keep him happy and motivated.

The second one is small, quick, sharp and reactive. He is extremely biddable and tries everything he can stay out of trouble. He simply does not like to be wrong.  When we walk to the sheep he stays close to me waiting for me to send him. When called off he doesn’t run off but stays close to me. He can be sensitive and submissive to correction but luckily he needs very little being such a good listener. An easier combination to work with than the other pup.

He has great flanks, outruns and uncanny feel for sheep. He has plenty of pace and decent push on the fetch. However, he is lacking that forward on the drive. Some of that is lacking confidence “in the task” but some is his “bubble distance”  – he doesn’t like to push through. When he actually pushes past this comfort zone … the tension comes out. So, instead of pushing on steadily he tends to do it in “spurts”. He’s a bit “wound” like a rubber band too tight that breaks and shoots forward.

So, I will put sheep up against the fence and teach him to keep walking closer and closer to his sheep … helping him to stay relaxed and calm while he pushing through his bubble.

I’m going to have to watch myself with him as he is one that excels at “guiding” sheep from a lot further back than I am comfortable with. So, I need to adjust my comfort zone to fit him not the other way around. If I try to MAKE him push on when he truly doesn’t NEED to – I will be taking away one of his most valuable assets. However, he will need to learn “push” as well as “feel” – so I need to “slip” in more forward without losing his distance feel.

The best thing about these pups is they are both very enjoyable to train. This makes you go out of your way to find time for them. It’s harder to train when you don’t enjoy the “clay” you have to work with.