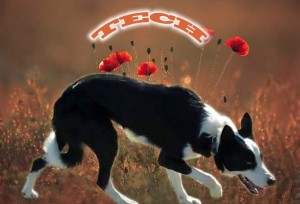 Tech is progressing well. He wasn’t as “quick off the blocks” as Gear and has taken more time – but it was time well spent. He has won a number of Nursery and Pro Novice classes so getting ready to move him to open. He needs stretching out on his outruns as he can still be a bit tight. Also, needs hill work (not many of those around here :@) to teach him how to navigate different terrains.

I already have to many open dogs but still looking forward to moving him up after winter training.

I like him so well that planning on a repeat breeding late spring/early summer of 2015.

Took Tech out for a “spin” on the sheep at 4 months. Just for fun … he won’t be started for a LONG time.

Tech on sheep for first time.

Tech is a 1/2 brother to Gear both are sired by my new Moss:

His dam is Jet (sired by Jim Cropper’s Dan … who is sired by his Sid). She is a very fluid worker and sheep seem to like her. Good flanks, great outrunner, biddable and good listener. Being a “smoothie” (smooth coated) was just “icing on the cake”.